Green Deal, life-giving air or the hygiene trend in the bathroom – the first digital edition of ISH, the world’s leading trade fair for HVAC + Water, put the spotlight on themes of social, political and economic importance. A total of 373 companies presented their innovative products at ISH digital 2021.

The importance of the top themes chosen was evident even at the official start of ISH digital 2021 on 22 March: Peter Altmaier, Germany’s Federal Minister for Economic Affairs and Energy, discussed the foremost challenges of climate policy and emphasised in particular the great significance of one of them, the European Green Deal. Volker Bouffier, Minister President of the State of Hesse, and Markus Frank, Head of the Economic Affairs Department of the City of Frankfurt am Main, also underscored the importance of sustainable solutions and technologies.

The Green Deal was one of the important future-oriented themes in the Energy section of ISH digital 2021 with presentations of heating solutions and systems that make a decisive contribution to achieving climate targets. The current political framework in the heating market was discussed in detail in the ISH Technology and Energy Forum. Another important topic was the vital contribution of ventilation and air-conditioning systems against the background of the on-going corona pandemic. These subjects were also covered in the Air Conditioning Forum. Great interest was also shown in the Building Forum, which offered up-to-the-minute information about funding programmes and building regulations.

The Water section, which this year focused on drinking-water hygiene and the growing trend towards greater bathroom hygiene, also proved extremely popular. Thus, dirt and bacteria-resistant surfaces, touch-free operation and hygienic electronic bidets demonstrated how the sanitation industry is reacting with smart solutions to increasing expectations in terms of hygiene. Particularly popular were the discussions in the ‘Pop up my Bathroom’ trend show, which took the form of a physical installation in the ‘Forum’ building of Frankfurt Fair and Exhibition Centre, and presented three bathroom-design trends under the motto ‘Inside I Outside’: .Smart Bathroom, .Living Bathroom .Green Bathroom.

All participants – visitors, exhibitors and speakers – gave ISH digital 2021 a positive rating. Wolfgang Marzin, President and Chief Executive Officer of Messe Frankfurt, said he was extremely pleased with ISH digital: “Naturally, a digital event cannot offer the strength of a physical ISH. However, we never intended that ISH digital should do so. We wanted to launch a high-grade networking platform and depict the sector’s most important themes in a concentrated way. I think we succeeded in this and Messe Frankfurt has been able to set a benchmark for Germany and Europe with the first digital edition of ISH.”

The patrons of ISH also gave the event a positive rating: “We are all more than satisfied with ISH digital 2021. Our themes generated an international echo. We were always well aware that a digital fair cannot be compared with a physical fair, let alone replace it. Nevertheless, the international market leaders took part as exhibitors and thus confirmed the status of ISH as the world’s leading trade fair for the sector even under the difficult circumstances prevailing at present. On the visitor side, the installation trade was, as always, the largest group. However, many planners, engineers, architects and the trade took advantage of the facilities offered by ISH digital.

The significance of the fair and its products and themes was underlined by the impressive political involvement. In addition to the prominent politicians at the opening ceremony, numerous representatives of Germany’s national political scene – from secretaries of state to members of parliament from all parties – took part. The biennial cycle of ISH trade fairs was maintained and with it the powerful image of the ISH brand.

ISH digital was a highly educative experience for all of us and we will employ this knowledge for ISH 2023, which will be rounded off by a variety of digital modules. We are confident that the next edition of the fair will once again be held in the exhibition halls of Messe Frankfurt.”

The overall focus of the event was on connectivity, knowledge transfer, high-grade content, a comprehensive programme of events and the latest solutions and innovative products of the exhibitors. A total of 290 hours of content was broadcast during the live event from 22 to 26 March 2021. There were 277 live and digital events, which were watched by more than 47,000 viewers. Altogether, some 69,000 participants, 42 percent from outside Germany, made active use of ISH digital 2021. Additionally, the platform was supplemented by ISH Radio, which was able to boast around 29,000 enthusiastic listeners.

The networking continues and personal appointments can be made with exhibitor representatives until 1 April 2021. Furthermore, the platform remains open to all participants until 30 April 2021, thus giving them the opportunity to watch recorded content and make contact with potential customers or suppliers.

The next ISH will be held at Frankfurt Fair and Exhibition Centre from 13 to 17 March 2023. 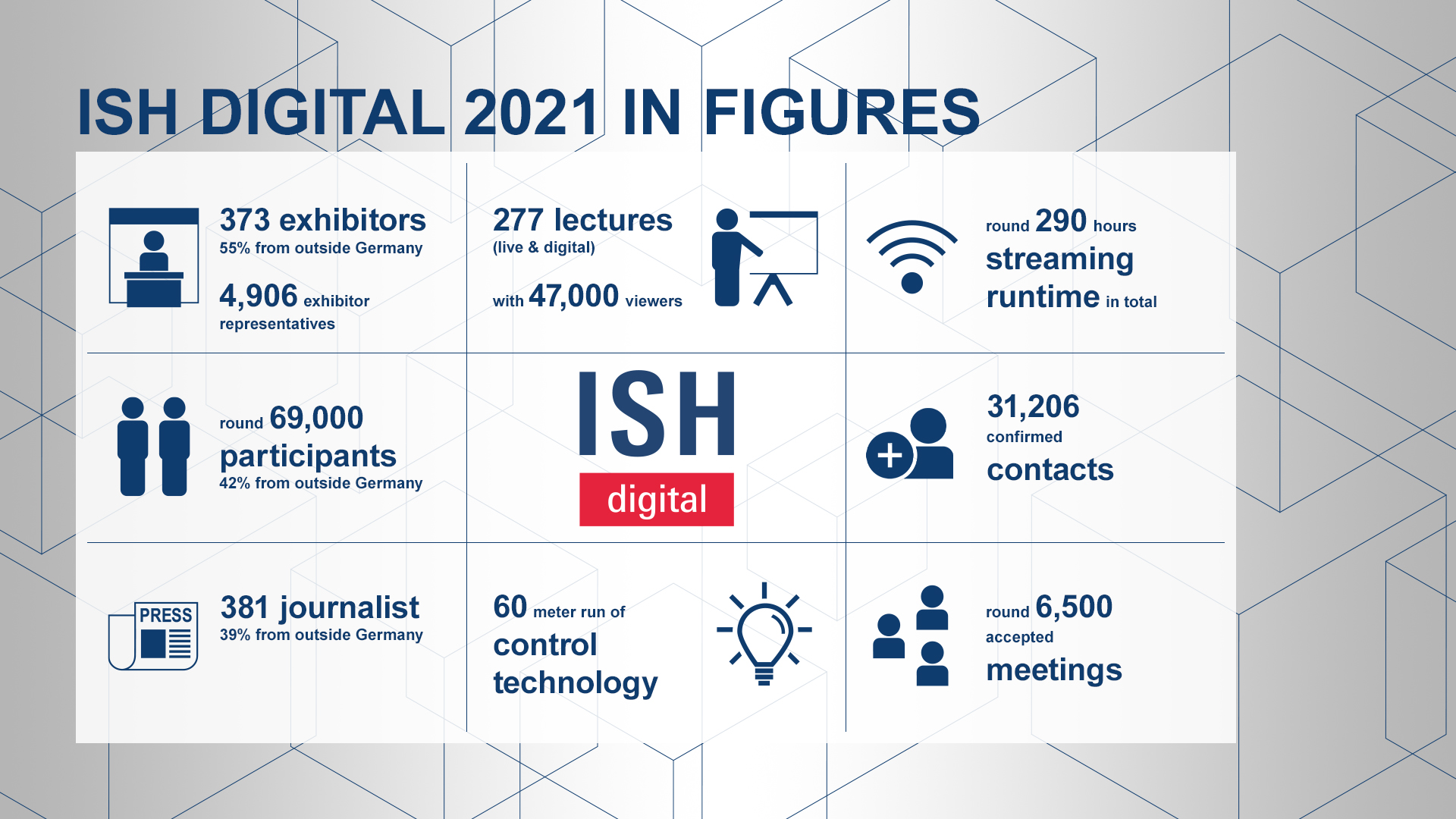